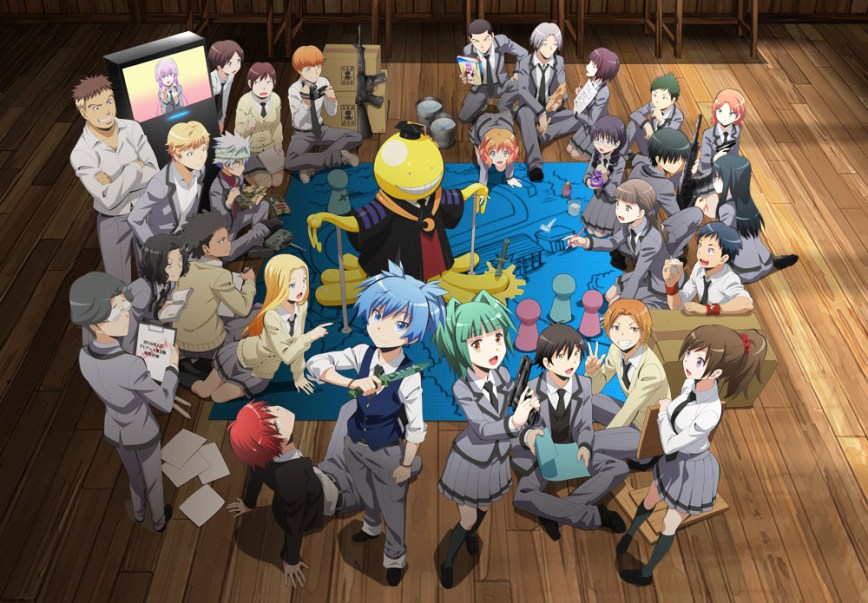 I was introduced to Assassination Classroom when I was searching through shows on the Funimation app. I just happened to stumble upon it. I read the synopsis and immediately I was intrigued. The next time I talked to my brother, I told him he needed to watch it. That was when he informed me that he had already watched it, and he highly recommended watching it. I have decided that this review will only cover season one. I will review season two as soon as I finish watching it.

Assassination Classroom begins with junior high class, 3-+E. A classroom full of delinquent students and misfits. Class E has everything from the worst grades in the school to the students with the worst attitude. They are put into a school secluded from everyone else. Soon another misfit is added into the mix, their teacher. Later named, Koro-sensei, is a bio engineered entity who has plans to destroy the planet. In order to show off his power, he destroyed 70% of the moon in a single second. He has incredible speed and clocks in at mach 20. He is essentially unkillable. The students are told they must kill their teacher in order to save the world. Season one depicts the journey of class E going from misfits with no future to an assassination classroom full of potential and success.

I usually start with my cons, however, after watching season one I couldn’t seem to find really any cons to Assassination Classroom. I even sat down and watched it twice to see if there was anything I missed. With that being said, if I was going to be nit picky, then the only negative thing I could say is season one doesn’t really give you a clear picture of Nagisa, our main character. He just doesn’t seem to be an important character and blends into the background. The first two-thirds of season one focuses on other characters and their struggles. Nagisa just happens to make small appearances here and there. It isn’t until the last few episode Nagisa becomes an important piece to the class. Like I said, it was difficult to find any flaws in Assassination Classroom. I was grasping at straws to find something to work with, but I also know that there is no such thing as a perfect show.

Even though I couldn’t find many cons about Assassination Classroom, I did find several things I loved about this anime. In fact, the thing I love the most about Assassination Classroom is the messages each episode teaches. There are deeper meanings in each episode. For example, there is an episode based around Tomohito Sugino, a baseball player. In this episode, Sugino tries to imitate a famous baseball player’s signature fastball when attempting to assassinate Koro-sensei. Koro-sensei tells Sugino he will never perfect that fastball because he isn’t built like that player. The take away message I got was not to copy people, but to use those you admire for inspiration to be yourself and that no person is like another. In another episode, the student must score in the top ranks during finals in order to gain an advantage against Koro-sensei in their next assassination attempt. Karma, the number one student in the class, becomes super cocky and thinks he can get away without putting effort in and still come out on top. When he fails to place in a top rank, he learns his lesson the hard way. I couldn’t help but add his lesson as it is one of my favorites of the entire season. There is such power behind those words.

Another thing I love about Assassination Classroom is the originality of the story. There isn’t anything like it. A Bio engineered organism tries to destroy the world, but only after teaching a group of juvenile delinquents. It’s not a story you hear everyday. The characters are just as great. My favorite character is Karma. He’s essentially the super smart sociopath with an attitude problem. However, I don’t think there is a single character I don’t like. The comic relief in every episode is pretty amazing. Usually Koro-sensei is the comic relief. However, there are other times when other people take the reigns from Koro-sensei. I can’t forget Koro-sensei’s Drawing Song. It was not only catchy, but also very humorous.

Overall, there is no way I wouldn’t recommend Assassination Classroom to everyone. It probably has to be one of my all time favorite anime right now. I think what really won me over was the constant lessons. It never failed, in every episode, Koro-sensei would give a lesson to someone in the class, and I always had to stop and think about how that applies to my life. The way I see it, if an anime can make me do something like that, it has some power in its’ core. If I can take home a lesson, in my opinion, that is what makes a show truly great.

One thought on “Assassination Classroom Review”