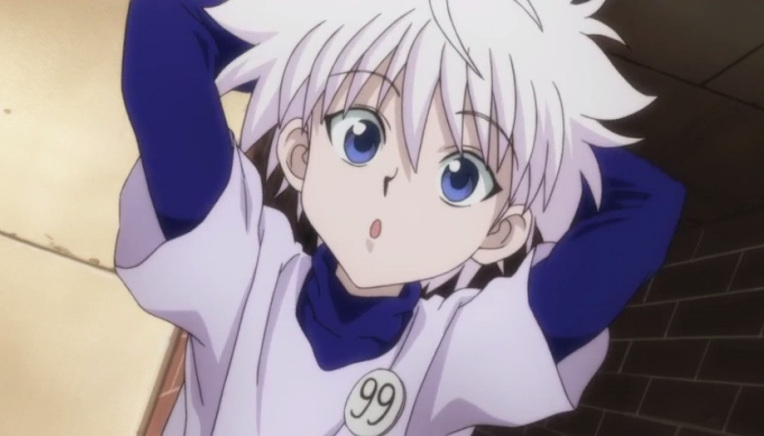 Before I even get into this topic in detail, I need to make a disclaimer. If I were to really sit and wrack my brain over this topic, I am sure it would have a completely different outcome to it. However, I really don’t want to take something that is supposed to be fun and turn it into something stressful. So, I decided before I even started typing that the first characters I think of are the ones that I will put on this list. In a way, that is the only way to make a top list. If the character requires a lot of thought, then can they really be classified as a favorite? I guess this list will only reflect the most memorable characters in my mind. So without further ado, let’s get started.

Now, I don’t know what it is that I like about Killua so much. Maybe, it is the fact he has overcome parent’s expectations and is becoming the person he wants to be or maybe it is just simply the friendship between Gom and Killua that I like so much. Now, I haven’t completed HunterHunter, so I wouldn’t be familiar with his character completely. However, what I have seen of him, he belongs on this list. He is my favorite character in the show. He is so aloof and carefree. He is a wolf in sheep’s clothing and I find that fascinating. Also, with his back story of being from a family of well renowned assassins and his treatment, I couldn’t help but love the character and care for him I just seem to be attached to characters that give no shits about anything. Maybe that is a personality flaw on my part. Who knows?

Sana is a child actor and main character in Kodocha. She is so over the top about everything whether it be in her career or just sitting at school with her friends. There are countless times that the things she does gets her into trouble in many ways. Yet, she is so compassionate and innocent. Some of my favorite moments with Sana are when she is competing with her archenemy and best friend Akito. She tries to destroy him, but ends up losing herself. Even though her goofy moments are great and I find myself laughing at every turn, my absolute favorite thing about Sana is her channeling her emotions through music. She has this strange keyboard and voice recorder that she uses in about every episode to make a song about her feelings. Usually, she just ends up making it worse, but hey you can’t blame a girl for trying.

Koro Sensei is another character that is on this list for his complete humor on a show. Everything about Koro Sensei belongs on this list. He is certainly the comic relief of the show and always has me cracking up about something stupid, but humor isn’t the only thing that Koro Sensei has. He has a past that he has managed to shed which has allowed him to become the person he is. He also has a conscience. His position has allowed him to mold children into capable adults, and although unconventional, he does his job flawlessly. His lessons are something that not only do the children take to heart in the show, but I find myself taking to heart in the outside world. Whether it be his perverseness, his humor, or his lessons, Koro Sensei is one of the best characters an anime has to offer.

I have always had a thing with Kyo. He has always been the sweet bad boy that you can’t help but root for. He has a temper and a very bad attitude, but underneath it all, he just wants a place to be able to call home. He deals with so many demons that it is truly amazing he hasn’t snapped yet. Essentially being the black sheep of his family isn’t enough, but he also has a curse he has to deal with. The poor guy can’t catch a break. I don’t know I just have always loved Kyo. Even when I just started watching Fruits Basket back when I was in junior high. His compassion for those he cares about runs so deep that you can’t help but notice. These are the reasons why I truly feel for Kyo.

Now, does Hiei truly deserve to take the number one spot on this list? Probably not. However, Hiei is the one character I have ALWAYS had an affinity for. The typical bad guy turned hero. He has his horrible attitude, but deep down he still has a heart. Underneath it all, this demon just wants to find his sister and make sure she is safe and protected. How can you blame a guy for that? I don’t think it is just an affinity for Hiei but a down right obsession. There have been so many time when I was growing up that I had my pictures of adorable little Hiei on my wall and stories in my head. Anything that had him on it, I had to have. Now, there will soon be a pop vinyl of Hiei and you can bet that I will totally go out of way to buy him. The obsession is strong with this one and I don’t really have a reason as to why.

So there you have it. My EXTREMELY biased top 5 all time favorite characters in anime. Now, sure maybe a little ways down the road I will take the time to carefully gather some ideas and form a better opinion but for now these are my favorite. Like I said, I didn’t want to think to hard on it because how can you have favorites if you are analyzing every little detail. I’ll leave this here for now. What are your top 5?

6 thoughts on “Top 5 Characters In Anime”