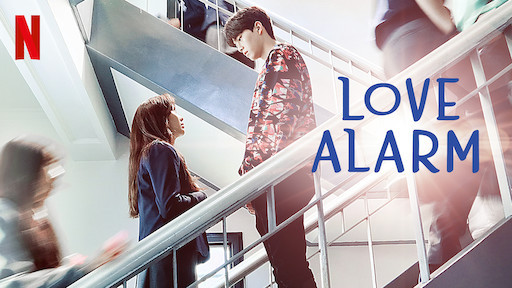 Love Alarm is one of the newest additions to Netflix. I found this precious gem when it appeared as the featured show on my home page. Considering that my entire home page consists of Asian dramas, it doesn’t surprise me. What grabbed my attention about Love Alarm was the overall concept paired with a fantastic teaser trailer.

Love Alarm is an eight episode series on Netflix about a love app. This app makes it impossible for people to hide their feelings. Anyone who loves you within a 10 meter radius will trigger on your app when turned on. As you can imagine there become controversy over this app as the show progresses and raises the question, Is this app really beneficial? The beginning of the series follows the progression of the app from its infancy through its global takeover. During this time, many people are solely relying on Love Alarm to dictate their love life. This doesn’t exclude our main character, Jojo. Jojo finds her “true love” via Love Alarm, but that doesn’t stop the drama in her life. If anything, it just makes life worse for her. She soon loses all of her friends due to the app. It also puts an even larger wedge between what family she has left. After a few months, the negative effects of the app begin coming to light. The question begins on whether or not Love Alarm is safe to be using physically or emotionally.

Finally, toward the end of the series, we skip to four years after the release of Love alarm. There are now exclusive clubs for people who have a lot of “hits” on their Love Alarm counters. There are also groups that decide that the app is not safe after tragedy strikes on multiple occasions due to Love Alarm. What we are left with at the end is the release party of Love Alarm 2.0.

Now, I don’t want to give away spoilers because that just isn’t my style on my reviews, but I do want to be clear that there are some very dark aspects covered in season 1 of Love Alarm. There are things such as assault and suicide. So, if these are things that upset you, you may want to pass on this or at the very least watch it with someone else. Now, there is not a lot of these things throughout season 1, but I know that it can only take one trigger for someone, so I did want to give the warning.

With all that being said, i absolutely loved season 1 and I hope they continue on with the series. Which what I have seen, there are a lot of people who were upset about the cliffhanger ending. In my opinion, I feel like that is probably enough reason to continue the series. They more than likely have enough of a fan base to do so.

I loved Love Alarm for so many reasons. First, it is your typical romance drama. Honestly, I am a sucker for romance. Secondly, I love the concept behind Love Alarm because it is something that I could totally see being a real thing. More than that I love that it shows the extreme real possibilities of what could happen with something like Love Alarm. People rely on love and companionship and to see what the lack of those things and the result was completely realistic. Finally, I think what makes me like this series more than anything is that it isn’t an over the top romance. Yes, it has a lot of it, but the balance between the romance and other issues is well done. We get to see more than just the romance between Jojo and Sun-oh. We see the repercussions of relying on the app for love, the trauma from childhood, and the difficulty between families.

Overall though, this is probably one of my favorite kdrama series of all time. Even though there are only 8 episodes so far, I binge watched the whole thing in a day and I cannot wait until the next season comes out. Considering the crazy cliffhanger, i don’t know if I can hold out until next year for season two without going crazy. This show certainly gets 5 stars from me, simply because i cannot seem to find anything (YET) that I don’t like about the series.

So for anyone who has watched Love Alarm, I would love to hear your thoughts and ideas about season one. I would also like to know who’s side you are on. Sun-oh? Hye-yeong? Or do you feel that Jojo needs to keep her shield until she sorts herself out? Until next time guys, thanks so much for taking the time to read this one!!!!