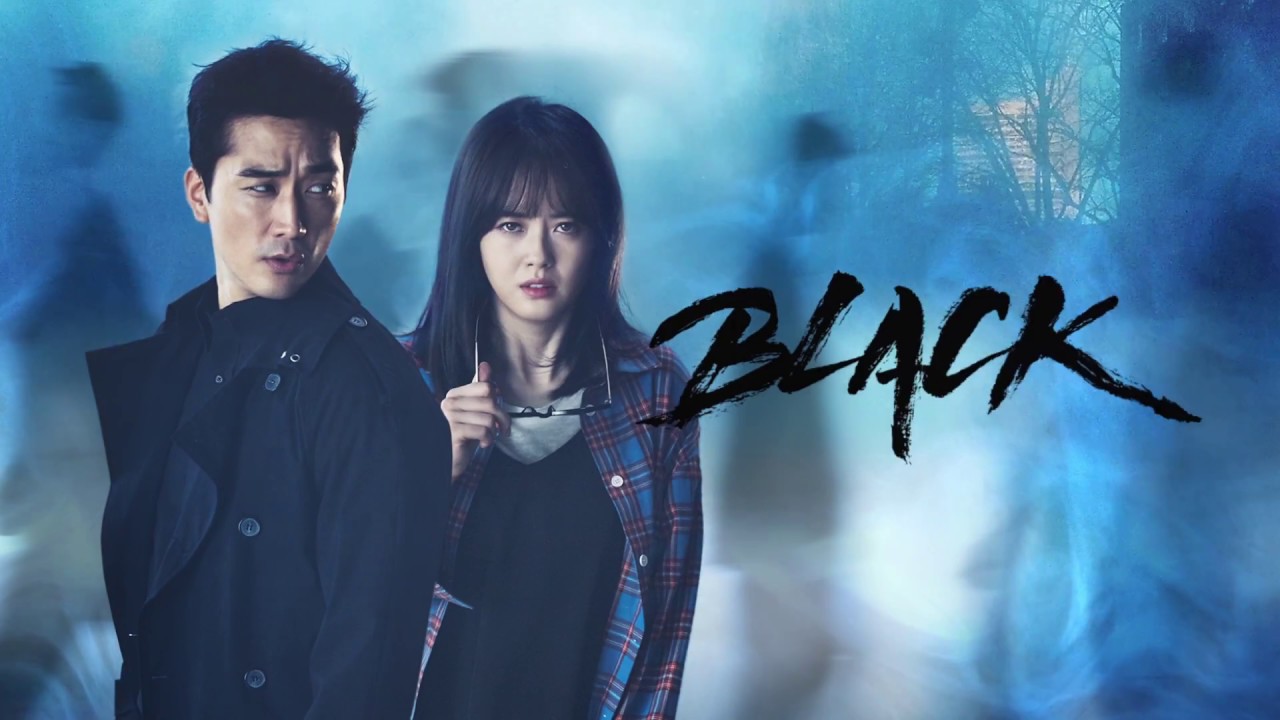 I don’t even know where to start about Black. It is one of my all time favorite Korean dramas. It has everything that I could possibly want with a story. It has a true plot line with the hint of romance. Black takes the viewer on an emotional roller coaster, and honestly by the end of it, the rights and wrongs are blurred, and you don’t know who the good and bad guys are. That is one of the reasons why I love it so much. It gives me something to think about, and isn’t that what makes a good show?

Black has two main characters, a girl named Ha-ram and a guy named Moo-gang. Now, Ha-ram can see shadows of death. These are there in the moments before someone dies. This is the driving force for her story. Her journey is to learn and understand what having this gift, or burden is meant for. Does she use her ability as a gift to help save others? Or does she keep everything hidden from others and live a quiet secluded life ignoring the shadows? With that being said, every action has consequences. Are those consequences worth the lives of those on the verge of death?

As for Moo-gang, he is a detective with a mission. He has joined the force in Korea in order to solve his brother’s murder. It isn’t long until he meet Ha-ram the girl with the special eyes. They start working together saving lives, until a tragedy unfolds. This tragic event changes Moo-gang forever.

The story begins when Ha-ram winds up at the police station after making a scene at the airport. This is where she meets Moo-gang for the first time. He believes in her ability, telling her it is a gift and she can save lives. After much convincing, they begin working together doing just that. After a tragic accident saving a man from death, Moo-gang becomes another person, literally. His body is then taken over by a grim reaper, Number 444. This grim reaper must find his run away partner before it is too late. If he doesn’t find his partner, he will become a criminal in the underworld and will become Cerberus the three headed dog, essentially.

Throughout the story, there are many different things that these people learn. Black (Number 444) learns exactly who he was when he was alive and the tragedy of what happened to him when he was alive. They unravel a corrupt business that has left death and despair in its wake. They also learn just how far this corruption has spread and the lengths those involved are willing to go to keep their secrets. A story of murder, child prostitution, and revenge await for those who take the time to sit and watch Black.

I don’t want to go into many details about the storyline of Black because in my opinion, it is fun to sit and try to solve the mystery as it unfolds. There are so many important details, it is hard to not reveal a lot of the major story when writing this. Now, I highly recommend taking the time to watch this thrilling drama. The storyline and characters are so fascinating and original. I loved every second of this drama. I have now watched it twice and it is still my favorite drama by far. It had me laughing as well as crying. Especially the end of the story. I don’t know if I would consider it a happy ending or not. It gives me so many mixed emotions.

The only negative thing I can really say about Black is that the ending gets a little confusing. Once Black makes his decision on how to handle the situation, things begin to get a little confusing. I don’t understand how the turn of events leads to the ending that was created. Although, I love the end, tears and all, it just doesn’t add up. Maybe that is just me missing some important details, but I am not sure. (I am absolutely willing to discuss in the comments with anyone who has watched it.)

Overall, I know I have said this like three times now, but it is my absolutely favorite kdrama. I feel it is absolutely worth watching if kdramas are in your interests. Between the characters and the story itself, I just couldn’t get enough of it. I binge watched all 16 episodes in like 2 days. This dark tale is right up my alley, so it is hard for me to speak bad of Black. It also helps that the show was running with some of my favorite Korean actors and actresses from the beginning. It is absolutely phenomenal. That is why despite me not understanding the ending, I still have to give Black 5 stars.

Just a side note, anyone who has watched the show, I am totally up for discussion. This is one of those shows that I would love to talk about more in depth for those who love it just as much as I do.